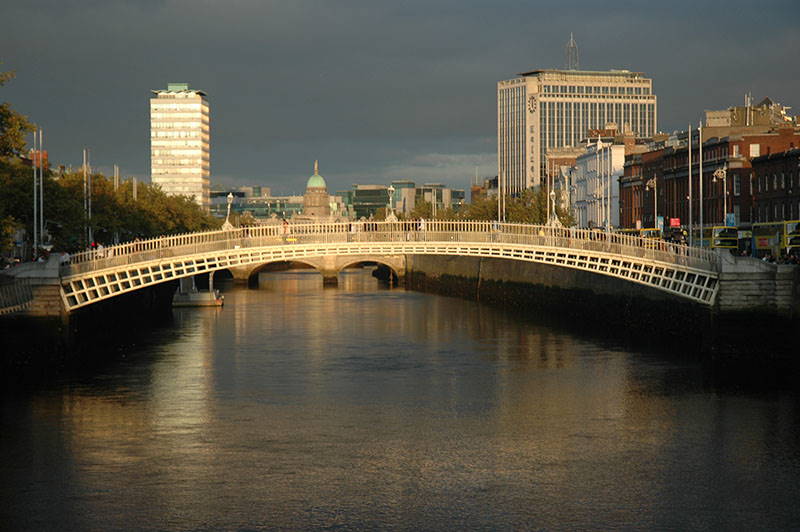 Travel on a private guided tour along the shores of the tour of the northern half of Ireland - coasts and green, gentle slopes. Part of the fun of travel is finding new and unique areas to visit, and there are many different alternatives here. See remarkable natural formations, impressive round towers on Devenish Island, and authentic Irish heritage sites. It’s a journey not to be hurried. Every twist and turn in the road will reveal new sights, well placed stopping points, offering uninterrupted views to Scotland on one side and tall limestone cliffs dissected by beautiful glens on the other. Using Belfast as our base, we explore the land of St. Patrick, the Titanic, award-winning gardens, and more. This tour is limited to 10 people.

Sunday - DEPART FROM HOME Your vacation begins the moment you board your flight. Destination: NORTHERN IRELAND.

Monday - BELFAST Welcome to the capital of Northern Ireland. Belfast is a Victorian city. The ill-fated Titanic was built here in 1911. On our panoramic tour, we see the Falls Road, the murals, and the Titanic Quarter. See the Parliament Buildings at Stormont. Visit the authentic 19th century Crown Liquor Saloon, a restored national landmark.

Tuesday - DOWNPATRICK/MT. STEWART /ARDS PENINSULA Here the Good Friday Agreement was negotiated as roadmap for peace, political stability and economic progress. The Saint Patrick Centre, beside Down Cathedral and Patrick's Grave, is dedicated to Ireland's patron saint. Discover the Irish Christian legacy of missionary activity, metalwork and illuminated manuscripts. Travel via ferry to the scenic Ards Peninsula, to Mount Stewart House, Garden and Temple of the Winds. The house was home to a fascinating array of political leaders and society figures. The luxurious gardens have been restored to their glory. In inclement weather, we visit Castle Ward instead. (B,D)

Ireland’s famous patron saint didn’t actually come from Ireland. Saint Patrick was taken prisoner from his family home in Britain by Irish raiders and was brought to Ireland to work as a shepherd. After Patrick escaped back to Britain, he had a vision from God telling him to return to Ireland as a missionary. Now credited with introducing Christianity to Ireland, relics of St Patrick’s time here can be seen all over Ireland. One of the best known is Croagh Patrick in County Mayo, where Patrick fasted for 40 days in 441AD. Today, pilgrims climb the mountain every year on the last Sunday in July. Saint Patrick’s remains are believed to be buried in the grounds of Downpatrick Cathedral, County Down.

Wednesday - COAST ROAD/GIANT'S CAUSEWAY/DUNLUCE CASTLE Take the stunning coast road to visit the strange natural phenomenon at Giant's Causeway, an area of about 40,000 interlocking basalt columns, the result of an ancient volcanic eruption. Dunluce Castle on its stunning cliff top location, one of the most extensive ruins of a medieval castle in Northern Ireland. (B,D)

Thursday - DERRY/OMAGH Entering Londonderry, you will view the most notable and historic feature of the city - its Walls, which are the most complete city walls in Europe. Almost a mile in circumference, they form a cobbled walkway around the city and provide a unique promenade towering above the city streets. Your guide will lead you on a walk (approximately 45 minutes) along the broad expanse of the walls. Pass the Victorian 1890 Guildhall, with its impressive stained glass windows. Next, pass small farm villages within sight of the Sperrin Mountains as you travel to the Ulster American Folk Park. Here, you book passage on a ship bound for America and emerge in a recreated Irish village of long ago. Tonight, enjoy a bed and breakfast stay, with a home-hosted dinner. (B, D)

Friday - BELLEEK/ARMAGH/BELFAST At the Belleek Pottery, shop for fine porcelain tastefully decorated with shamrocks or delicate trellis-like plates. Travel along Lough Erne. Discover the ancient ecclesiastical city of Armagh, the home to both Protestant and Catholic cathedrals. One of the sights you will see is Hillsborough Castle through its splendid wrought iron gates. Return to Belfast. (B)

Saturday - BOYNE VALLEY & TO DUBLIN Travel via the Boyne Valley with its megaliths, high crosses, and stone-age burial tombs - Newgarnge or Knowth (older than the pyramids!) to Dublin's fair city. (B)

Famous People from the North - To name but a few we have on the big screen a big presence led by Liam Neeson, Kenneth Branagh, Stephen Rea, Roma Downey, Formula One driver Eddie Irvine, motorcycling hero Joey Dunlop. Northern Ireland has produced a wealth of writers, among others Brian Friel and C S Lewis, the Christian writer of the hugely popular children's stories who was born in East Belfast. Our writing talent is also on display through Nobel Laureate Seamus Heaney, born on a farm near Bellaghy, and Oscar Wilde and Samuel Beckett who both went to school in Enniskillen. We have an abundance of musical talent and have produced such greats as Van Morrison, James Galway, Phil Coulter.

Sunday - HOMEWARD FROM DUBLIN Board your return flight to the U.S.A., with many happy memories of your Northern Ireland adventure. PLEASE NOTE: This tour will return to Dublin Airport. (B)

Tell us about your trip and we'll email you a customized price quote!