People always hear stories that driving in Ireland is impossible therefore they don't even try, opting for a small group tour of Ireland instead. First-time Irland travelers describe driving consistently as "the roads are small", "narrow" and "dangerous." The reality is that the roads have been widened over the past 15 years and driving in Ireland has never been easier. Going with the self drive Ireland vacation also allows much more flexibility to allow you to see and do what you want ... when you want.

To begin, many of the Ireland road signs are the same. Red lights, stop signs - they are international standards so driving in Ireland isn't quite so different than driving at home.

The biggest tip we can give everyone is to take your time while driving around Ireland and relax. We tend to put more pressure on ourselves driving abroad because we think it is so different when, in reality, it's just an adjustment. The Irish are extremely patient and don't beep their horns and flash their lights if you're going too slow... they'll simply wait for the right time to pass and leave you in the dust.

This is the biggest difference with driving in enchanting Ireland is that the Irish drive on the left hand side of the road, a slight adjustment but easily overcome. Take your time and repeat "Stay Left" as often as it takes, especially when there are no other cars on the road to follow. Your passengers should also say that the first day to remind you when you're paying attention to traffic.

Wherever you drive, the steering wheel will be toward the dividing line on the road... or toward the center. 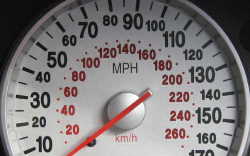 Most cars display the speed in Miles Per Hour with Kilometers Per Hour as a secondary measure - but all speeds and distances are listed in KPH. Keep an eye on your speed and remember to use the secondary speed indicator to ensure you're not breaking the speed limit as there are speed cameras near major cities (first-hand experience with an €80 ticket in 2005 outside Dublin!) 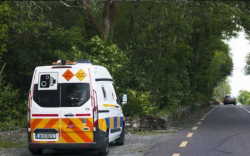 I had no idea there were speed cameras in Ireland until I received an €80 ticket in Naas, just outside of Dublin. I return to Ireland often so I paid the ticket with a credit card to ensure I could obtain a rental again in the future.

Fast forward to June 2014 and I noticed speed camera signs all over the place and made sure I was at or below the speed limit. We strained our necks to see if the cameras were like here in the States but couldn't find them. Then, as I was coming into Dingle, I noticed a van parked on the side of the road -- it's a mobile speed camera. They set it up and roll... and we were well below the speed limit! 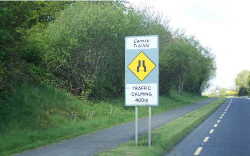 Speeds slow when entering towns and villages and you'll notice "traffic calming devices", nothing more than signs, small curb, speed bumps and crosswalks to remind you to slow down.

Please make sure you start slowing down when you see these signs as you'll likely encounter schools, churches or a residential neighborhood on the other side of that sign. 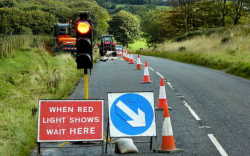 You'll see signs for many "roadworks", or road construction, throughout Ireland regardless of being in a big city or small village. Mind the workers, watch your speed and stop on red lights even if there is no one coming in the other direction.

When it comes to the red lights, you may think that you are waiting for a long time and there isn't someone monitoring -- do NOT decide to go! They put these red lights up while they are working so be patient -- we've never had a light not change to green at some point. 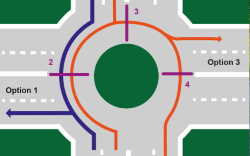 Roundabouts are traffic circles where cars merge into the circle and take their appropriate exits, a dancing of cars where no one stops and traffic rarely backs up. When entering a roundabout you should stay in the left lane if you are going to take the first exit otherwise you will stay in the right lane, signal with your turn signal and move left as your exit approaches. It's simple and a few of those you'll wonder why we don't have them here at home! 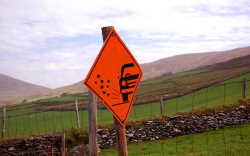 With many roadworks going on, Windscreen and Tyre Insurance is considered for those who are unsure about driving in Ireland. You can make this decision up until you check-in for the car rental. 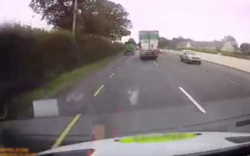 This is the one area where you really need to be alert and watch the road in all directions because you may find a car coming at you, in your lane, while passing another car. Many larger roads have a shoulder which slower cars will pull over and drive on and let other cars pass and everyone uses their signals to indicate this. When there is no shoulder you may still pass but keep alert -- oncoming traffic may be doing the same! If you see an oncoming car in your lane, pull to the left and drive on the shoulder to let them pass.